The 37th Annual Symposium of the
British Society of Scientific Glassblowers.

There was sometning strangely familar about this venue, the Grand Atlantic Hotel at Weston Super Mare, South West England. Of course we, ( the BSSG ), held our symposium here seven years ago, but however long I spend wandering around I failed to recall any vivid memories. This could be interpreted in two ways, either nothing remarkable happened or the symposium was so good that I spent all the time in the bar celebrating.I prefer to choose the latter as it is usually the bar at any symposium that proves to be a magnet in attracting delegates. So it was here that I found myself amongst friends on the evening before the symposium officially opened. Extending ones stay at a symposium beyound the programmed two and a half days is becoming more and more popular. The dedicated few is getting larger. I remember several years ago where I would share a conversation and perhaps a convesion with a delegate, now these first nervous contacts have blossomed into full fledged friendships.. If you are reading this and not attended a symposium because you think there is nothing on the programme to interest you, consider it an oportunity to make new friends, surely not an ida to be dismissed lightly.

The symposium was the first that I took more than just a passing interest in the trade stands, as Maureen my wife organised this vital part of the symposium. It amazed me the time and effort that was spent by all exhibitors in setting up their stands. The BSSG is indeed very fortunate and appreciate the support that it receives from the various companies. I found it fascinating to see an empty ballroom be transferred over several hours into a fsicnating “alandins cave” for scientific glassblowers. At one stage so elaborate was the stand being set up by BSSG Symposium newcomers Fantasy Gifts that I mistook it for the hotel extension and was ready to book in. Other Companies represented in the trade stand area were ;Bibby Sterilin Ltd, B&C Glastechnische mashinenbau-und vertriebs GmbH, Crandon Diamond, Fantasy Gifts, Glass Training Ltd, Plowden and Thompson, Radleys, Schott, J Young Scientific, York Glassware Services. The designs of some of the stands is becoming increasingly inovative, which as Maureen pointed out to me should be recognised, perhaps by a “ Best stand of show” award. Any one else agree?

The symposium was opened by Councillor Jack Dagnall, Chairman of North Somerset District Council, who was then escorted around the trade stand area by BSSG Chairman Graham Reed.

Alan Bennet of Hi-Q Glass gave the first lecture on a subject obviously close to his heart, single surfaces. Alan spokeenthusiasically and with a unique in depth knowledge of his quest to prove Kleins single surface bottle can be formed into one  mobius strip. To compliment his words Alan had brought along his collection of glass ware in all shapes and sizes, each one a variation of the Klein bottle.

Lecture two was presented by Mr J Hooker of G.E. Lighting Ltd. who spoke about glassworking in lamp manufacture. A fascinating lecture given at a great pace and with a vigour that was equally matched by the speed of light bulbs being made as shown on the video clips accompanying this talk.

In the evening we all went horse racing1 Actually to be honest we followed each other into a function suite where a large vdeo screen showed horses in full sprint( except mine ). Not a whiff of stable odour, deffinatley the hygenic and socially acceptable way of enjoying a night at the races. I think the idea was to invest some money and look forward to greater returns. In my case this meant leaving the room a few hours later with empty pockets. Not that I am a bad loser and in a strange way I enjoyed seeing Maureen bid against Mrs Pat Young, ( who was obviously planted to bid takings that night ). The look of horror on my face as the bidding went well into double figures may have given an impression of the opposite. The really good news is that £189 was raised for “ Drugs Awareness” charity, run through the local YMCA.

The honour of making sure delegates had something to look forward to after breakfast on the second day was given to Allan Brown from the University of Connecticut whose fascinating lecture on the Evolution of the insertion seal to produce side seals at various angles, justifabley earnt the title  “ Norman Collins Memorial” lecture. It was as many observed just plain good basic scientific glassblowing and its not often that is said today. At the AGM following this talk members heard and voted on a wide range of issues from setting new fees, procedures for agreeing to grants, the formation of a Web page for the BSSG on the Internet, and the relationship between NVQs and the BSSG.

Dr M Miles from the University of Bristol gave the first lecture after lunch on Scanning Probe Microscopy, or as it was subtitled” The Force is with us”. What took a lot of people by surprise was the minute sizes that Dr Miles spoke about. We are used to measurements relating to frctions of a millimetre but to talk about diameter s of one atom is truely amazing. Mr Cliff Rankin was next to lecture although a truer description would be to say that Mr Rankin acted as a tour guide where he took delegates on an interesting trip through the subject of fire resistant glass, all without anyone having to leave their seats. With the help of his companys, (Rankins Glass Company Ltd ), products on display delegates came away from the lecture much the wiser about the development, uses and future of sheet glass and fire resistant glass in particular. Closing the second days lecture programme was Mr Beadman who spoke about the manufacturing of glasstubing at Plowden and Thompson. With the help of a short video clip it was explained how tubing is hand drawn to specific dimensions. Samples of almost invisible tubing was passed around delegates, to illustrate just how small glass tubing could be produced.

Following a superb meal at the Annual Dinner the presenation of annual awards took place. Before the competion winners were announce, BSSG Chairman presented Mrs Marge Cullingforth, Marylin and Alan Brown,Councillor Jack Dagnall and his wife, with BSSG lapel pins. Symposium Treasurer John Turnock then presented Councillor Jack Dagnall with a £189 cheque for the “Drugs Awareness” campaign. Several Companies had organised competions for delegates from their trade stands. Bibby Sterilin offered a prize to the person who correctly guessed the amount of tubing that was used in making some glassware, and the lucky winner was Denis Jones. Fantasy Gifts offered one of their products , a glass ship in a bottle, as their prize. The winner  was Bert Chappell, and in presenting the glassware, Fantasy Gifts Sales Director Mike Wishart explained,that the ship in a bottle was just one of over 14,000 a week they make, 70% for export.

The BSSG Chairmans Rosebowl was awarded to Kath Evans of Bibby Sterilin, whose Marketing Manager Richard Aitken presented the Bibby Cup to Mark McClemont of Reading University. Allan Bennet won the QVF Trophy,Brian Moore recieved the David Flack Award for the best artistic piece of glassware, and Fred Morse presented the Thames Valley Cup to Christine Hart Marylin Brown accepted the Literary  Prize certificate on behalf of Fred Leslie, with Allan Brown accepting the Literary Trophy, the Lucy Oldfield Cup, on behalf of Gary Coyne. Certificates of appreciation were presented to Harry Butler and Bert Chappell accepted one on behalf of Peter Halliwell.

The after dinner speaker was Mr Ken Tucker, following which delegates relaxed and chatted into the early hours of the morning.

The last lecture of the symposium was given by Mr Geoffery Robinson who with the help of a large number of  “slides” clearly demonstrted the high quality of his art as a stained glass craftsman. 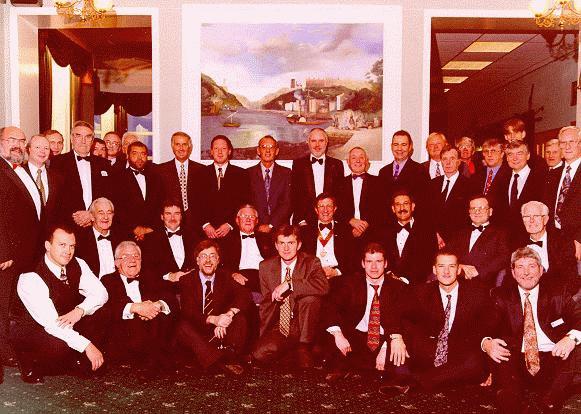